It’s not an official licensed Star Wars game – but it’s easy to see where the inspo comes from in this fast-paced, action music game. Wielding their HTC Vive controllers, players need to swipe and smack at fast-approaching blocks with lightsabers to the rhythm of catchy music tracks – and here at XGen-VR, we’ve got literally hundreds of tunes to choose from whether you’re a fan of rock, pop, or house. You’ll certainly have no problem finding your favourite tunes in our collection. 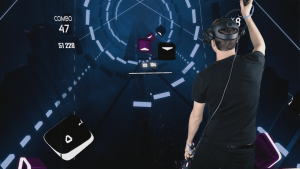 Slashing through the blocks is super satisfying – and with easy, normal, hard and expert levels to choose from plus directional arrows that you can choose whether or not to display, it’s easy to customise this game to suit your experience level and move up the ranks. Beat Saber is available to play in our virtual reality arcade or as part of our Luxury VR Room experience.

Superhot VR turns an already innovative, exciting shooter puzzle game into an even more memorable and immersive experience on the Vive. The stop time mechanic transitions from any movement of the player’s hands, when wielding the HTC Vive controllers. And, the Vive offers an exceptional tracking system allowing players to make fluid, precise movements with little to no frustration. Many places won’t offer this experience as you need a large play area to get the most out of this game, here at X-GenVR we have plenty of space and room for you to fight, dodge and shoot. 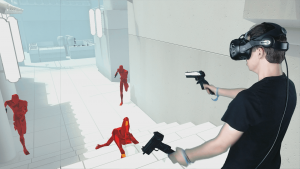 In Superhot VR, the main aim of the game is the same as in the original – work your way through a series of white rooms as you dismember your opponents with calculated movements. It’s a game that really showcases just how immersive virtual reality can be – and it gets your adrenaline pumping. Get involved with our Superhot challenge this month – it’s just £9.99 to enter, and you’ve got until the 24th of December to attempt a high score in the five-minute segments. You’ve got to be in it to win a free party package for four in our VR Luxury room and arcade.

If you’ve ever wondered what it’s like to be a space pirate, then get down to XGen-VR and find out in our Luxury VR Rooms. Space Pirate Trainer is one of the most popular shooting games available on the Vive – your controllers become your gun and shield. It is a shooting game that really stands out from the crowd – the tight, precise controls along with stunning presentation leave players feeling like they’ve just stepped straight into an 80’s sci-fi film. 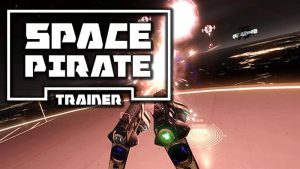 In the game, you’re mostly on an isolated platform and players must use the Vive controllers as guns, which can be set to perform a range of actions, including powerfully charged shots or bursts of shots. As you work through the levels, increasingly difficult waves of enemy robots will attack you, and it’s up to you to shoot them down while simultaneously dodging their fire. This immersive gameplay is suitable for players of all ages (7+) and is exclusive to our Luxury VR Rooms.

Come down to XGen-VR and play Beat Saber, Superhot VR, Space Pirate Trainer and many more in our Luxury VR Rooms. Prices start at just £29.99.